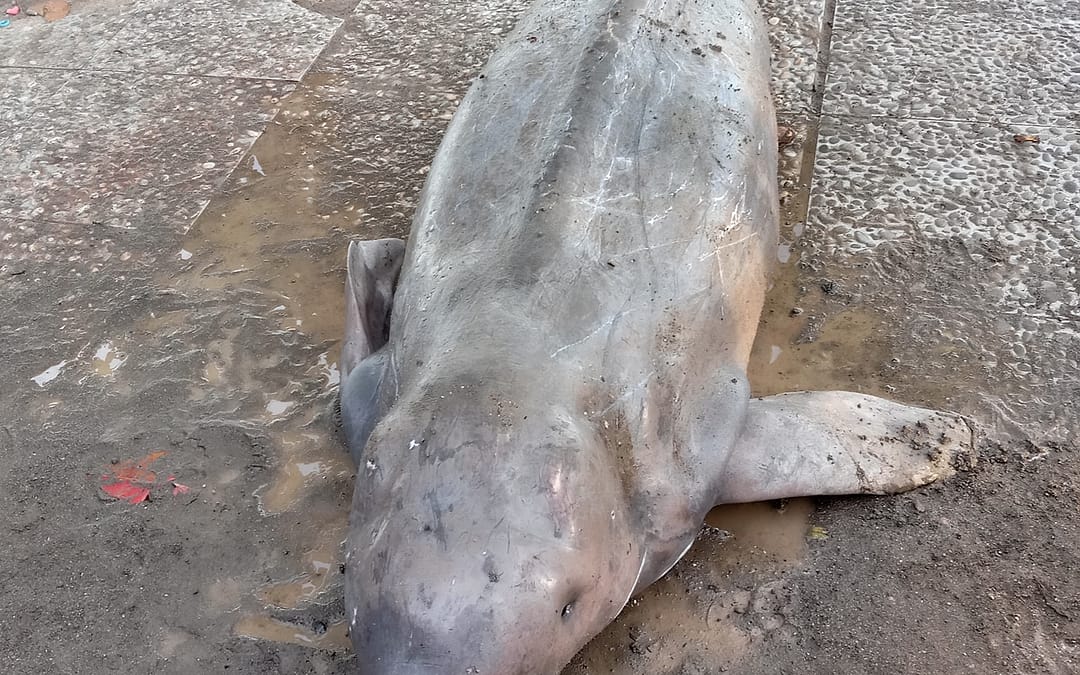 Sad news from the Waisai (the capital of Raja Ampat) yesterday evening 23.1.22; an adult dugong, found deceased, close to the public waterfront. Cause of death seemingly boat strike, based on the x2 propeller cuts on the animal’s neck.

Dugongs (dugong dugon) are the most beautiful creatures; shy, gentle, elusive, are found in warm coastal waters from the western Pacific Ocean, throughout SE Asia, through to the Eastern coast of Africa, usually inhabiting shallow protected areas with access to their favourite food – sea grass!  Growing up to a length of 4m and weighing between 250-500kg, dugongs can live up to 70yrs of age. Although they resemble cetaceans (whales, dolphins, porpoises) dugongs are believed to be descendants of land mammals.. making them more closely related to elephants than whales.

It is a rare and special moment to see a dugong in Raja Ampat, even though there are some areas that are known for more frequent sightings, it is still only an occasional. We recently had the privilege of seeing two of these beautiful creatures, resting on the surface of the water and diving the moment they became aware of us, and it saddens us greatly to see these images just a few short days later.

The Dugong is listed as Vulnerable, with population decreasing, on the IUCN Red List of Threatened Species. These days, dugongs are typically represented by diminished remnant populations, many of which are close to extinction.

The long lifespan of a dugong (of 70 years or more), combined with their slow rate of reproduction (maturity at 6yrs old, followed by 1 calf every 2.5-7yrs) makes them particularly vulnerable to anthropogenic disturbances. Worldwide, populations have suffered overexploitation primarily due to direct capture for its meat, hide and oil, and also because of habitat loss (silting of sea grass beds).  The most significant threat to Dugongs is fatalities caused by gill nets, which entangle them as bycatch. Other threats include pollution, boat traffic and illegal hunting.

A listing on Appendix 1 of the Convention on International Trade in Endangered Species (CITES) prohibits or limits the trade of this species or its parts. However, despite having legal protection in many countries, the Dugong remains extremely vulnerable to continued human pressure and applying conservation policy to legally address gill netting regulations is urgently needed.

In Raja Ampat, the greatest threat to dugong is habitat loss, coastal development, and of course, boat strike.

Dugongs are a Protected Species

Additionally, Dugongs are a protected species under Indonesian law (Law No. 7 (1999) concerning the Conservation of Flora and Fauna) and possession of their body parts, even after a natural death, is a crime.

We use cookies on our website to give you the most relevant experience by remembering your preferences and repeat visits. By clicking “Accept”, you consent to the use of ALL the cookies.
Do not sell my personal information.
Cookie SettingsAccept
Manage consent

This website uses cookies to improve your experience while you navigate through the website. Out of these, the cookies that are categorized as necessary are stored on your browser as they are essential for the working of basic functionalities of the website. We also use third-party cookies that help us analyze and understand how you use this website. These cookies will be stored in your browser only with your consent. You also have the option to opt-out of these cookies. But opting out of some of these cookies may affect your browsing experience.
Necessary Always Enabled
Necessary cookies are absolutely essential for the website to function properly. These cookies ensure basic functionalities and security features of the website, anonymously.
Functional
Functional cookies help to perform certain functionalities like sharing the content of the website on social media platforms, collect feedbacks, and other third-party features.
Performance
Performance cookies are used to understand and analyze the key performance indexes of the website which helps in delivering a better user experience for the visitors.
Analytics
Analytical cookies are used to understand how visitors interact with the website. These cookies help provide information on metrics the number of visitors, bounce rate, traffic source, etc.
Advertisement
Advertisement cookies are used to provide visitors with relevant ads and marketing campaigns. These cookies track visitors across websites and collect information to provide customized ads.
Others
Other uncategorized cookies are those that are being analyzed and have not been classified into a category as yet.
SAVE & ACCEPT